What comes to mind when you hear the words, ‘sleep’ or ‘a good night’s sleep’? A cozy bedroom with a high four poster bed. Crisp clean sheets. A pocket coil mattress. A warm duvet pulled up to your chin. Then you turn to your side. Supported by a fluffy pillow, bathed in the gentle glow of a full moonlight, lies the beautiful face of your partner in life sleeping peacefully.

Magical moment, isn’t it? You feel like waking her up and telling her that you love her.

And then, your life partner snorts like a hump-backed whale. The magical moment is lost. The full moon hides behind intense dark clouds. You console yourself that it was just a bad dream.

I found myself in the presence of the Grand Conductor of the Snoring Symphony. She was sitting on a high stool watching six monitors. Each and every movement and note of the symphony members were being recorded. I stood there for a while watching the lead singer, my wife.

Three months ago I faced a similar situation. NO. My wife was not snorting. Sometime early in the morning, I woke her up and told her, “Honey, you have stopped breathing”

I did not sleep much that night and many nights after that. Instinctively, I’d know when she held her breath. This happened four or five times a night. Except for the weekends when I’d have had a couple of beers and nothing would wake me up. I had even thought of watching her to see how long she could hold her breath. But being a sensible man and not wanting to be an accessory to death-by-breathlessness, I’d always wake her up.

This became serious. She fell asleep at the wheel once and drove the car into a fence. That’s when she woke up. She spent sleepless nights researching her condition. Finally, at her doctor’s advice we landed in front of a sleep clinic.

Why was I there? She refused to sleep in a strange place all by herself. Besides I was curious. What really happens behind those closed doors? 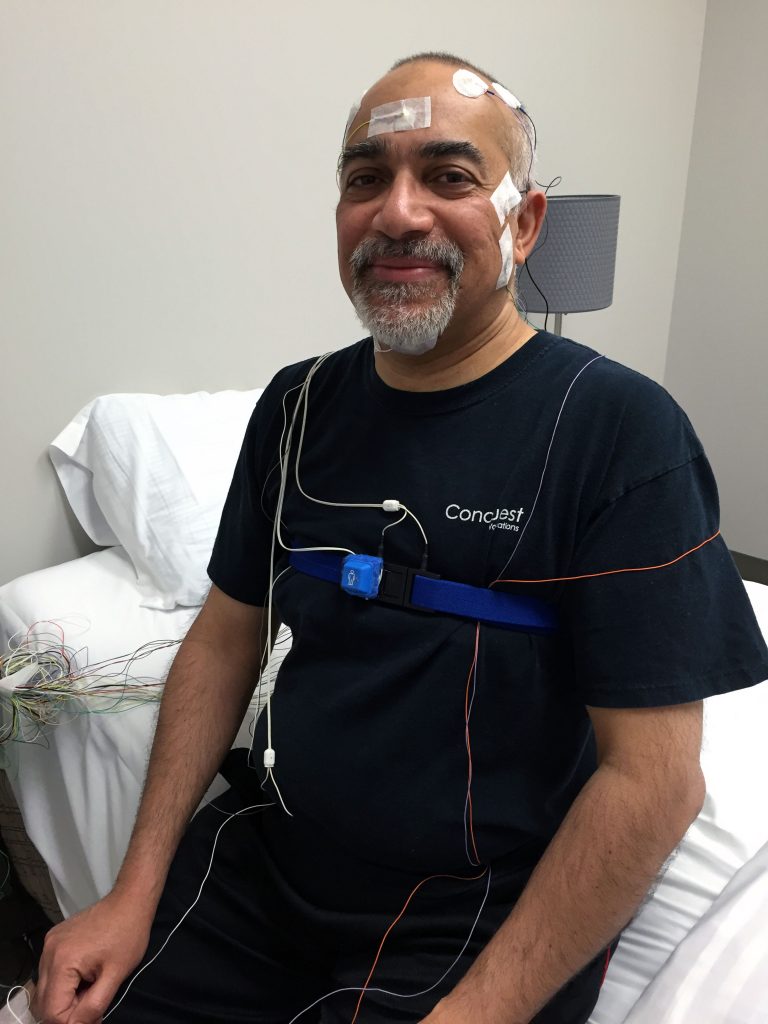 The sleep clinic was strategically located next to a Sleep Country mattress showroom. It’d be interesting to know which came first – the clinic or the store!

Behind a ‘clinical’ reception desk, there was a long corridor with rooms on either side. I had earlier opted for a single bed and room. [One person can accompany a sleep-deprived zombie.] I was looking for a good night’s sleep.

Before long my wife was hooked up to a machine with hundreds of wires.

With great courage I stepped into the corridor. I realized that there was a snoring symphony being conducted behind closed doors. I stood outside a couple of doors and listened. It went from snoring to whistling to snoring. The person behind the opposite door was trying to drown everything else. He or she sounded like a skidding car with ABS on.

At the end of the corridor a door opened. A man came out and walked past me like a zombie with hundreds of wires attached to his body.

When I reached the reception, I found myself in the presence of the Grand Conductor of the Snoring Symphony. She was sitting on a high stool watching six monitors. Each and every movement and note of the symphony members were being recorded. I stood there for a while watching the lead singer, my wife.

The results came back a week later. My wife was diagnosed with a disorder called sleep apnea. Snoring, breathlessness, and tiredness were just some of the symptoms.

One solution was to put on a mask at night which pumps air. The mask covers the entire nose. Every time I accompanied my wife to the sleep doctor, I’d recommend that she upgrades the mask to one that covers the mouth. You see, my wife talks in her sleep as well!

Years ago, soon after we got married, my wife jumped up in the middle of the night and asked me, “Madhav. Madhav. Is my mother-in-law dead?” Even then I had the presence of mind to respond calmly. “Not yet my dear. Now go back to sleep.”

Facebook-f Twitter Linkedin-in Home
We use cookies on our website to give you the most relevant experience by remembering your preferences and repeat visits. By clicking “Accept”, you consent to the use of ALL the cookies.
Do not sell my personal information.
Cookie settingsACCEPT
Manage consent